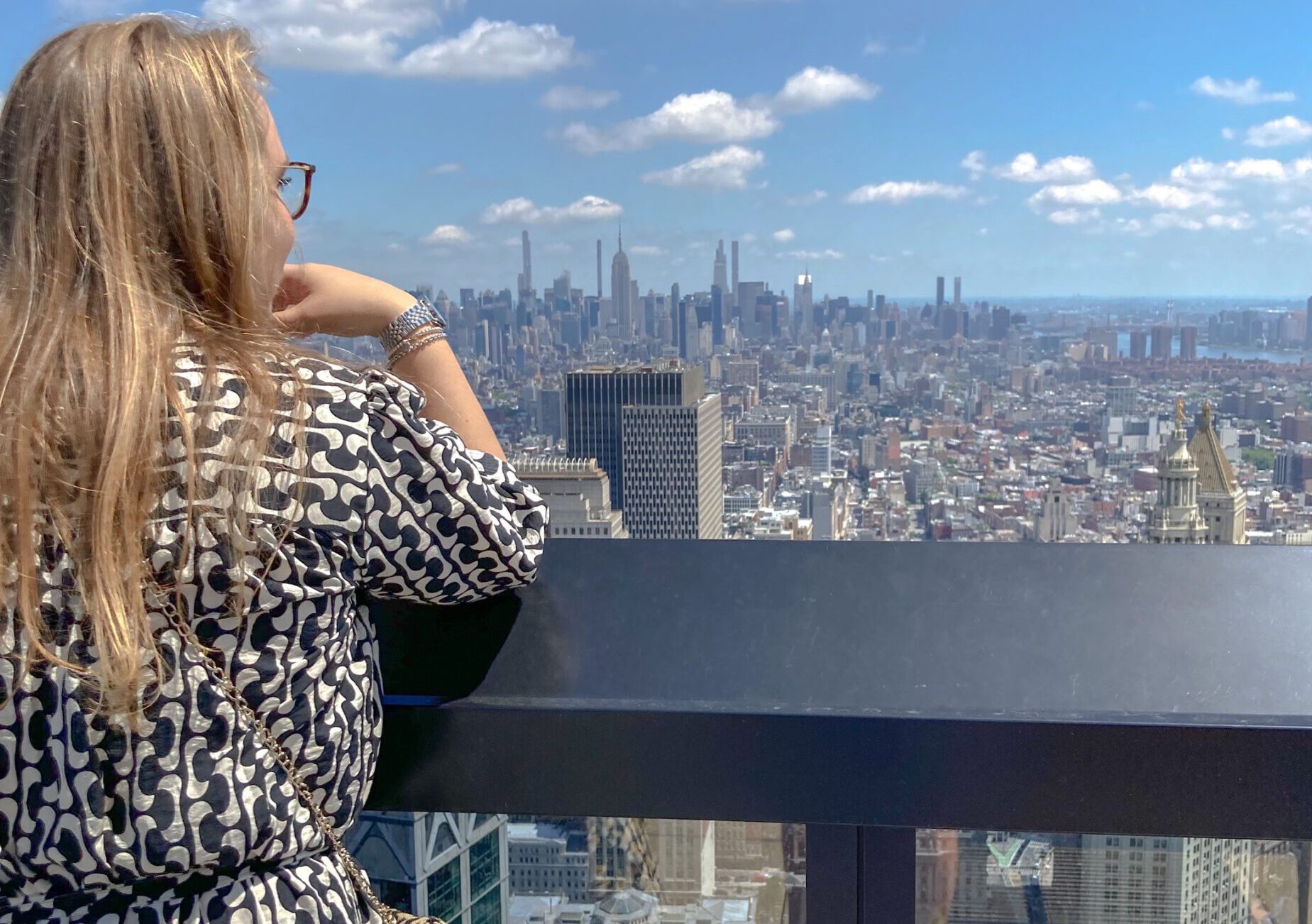 We are back from our trip to New York and wow, just wow. I already imagined this would feel a little different since we now know we are going to live here but it was even better than I expected. Ready? Here we go!

Tuesday June 7: I was kind of nervous for going to Schiphol Airport since there is a lot of chaos going on in terms of too many passengers and by far not enough employees to get all the work done. We went there on time to make sure we would catch our flight. So, with two large suitcases we said goodby to our lovely cat and left for Schiphol. Less than 30 minutes later, fully prepared for a lot of bustle we arrived at Schiphol where it was almost empty. We could walk in one straight line from arriving to checking in. Well, then it’s probably busy at the security, I thought. I was wrong, I think it took us around 30 minutes to get through everything. And so we had 4 hours left before our plane would take off. We already booked the KLM lounge at Schiphol so we dropped our bags in one of the lockers, had a drink and did some shopping before we could go to the gate. The flight was easy and a little over 7 hours later we set foot in New York.

On our first full day, June 8 we immediately had a busy day. We had scheduled 3 apartment tours, all downtown in Financial District. The first two were absolutely stunning and the last one.. well that one is already forgotten.. We loved to view the apartments and it did gave us a good idea of what we like and dislike. But what we mostly know is that all comes with a price..

In the evening we had dinner with a Dutch couple that lives there. He is a former colleague of my boyfriend and he moved to NYC with his wife who is also a blogger :). We had a nice dinner in Upper East Side, where they live and I was immediately sold to the neighborhood. After dinner we went to see their apartment and I knew I wanted to live in that area, I just had to convince Elliot.

On Saturday we had scheduled two more viewings. One in Upper West Side, the other one in Midtown East, at the waterfront. We liked both but were not convinced and so we went on with our holiday. And that evening was my favorite evening of the week. We had dinner at Cecconis in Dumbo, Brooklyn. We had an absolutely amazing view over the skyline of the City and although it was cloudy all day, when we sat there the sky opened up and we could enjoy a lovely sunset. And, I had the best pizza ever!

I could tell you our whole itinerary for the vacation but that will be quite long. So another highlight I would like to mention is our lunch in Lenox Hill. When we sat there at the cutest brasserie ever: Brasserie Cognac East. I immediately felt so at ease and at home there. It’s a more quiet and residential neighborhood and I loved the whole vibe over there. At that point I was absolutely sure I made my choice about a neighborhood to live in.

Monday was our last full day and we had such a cute night. Every summer they host Movie Nights in Bryant Park, organized by Paramount. There is a large screen and you are allowed to picknick on the lawn. It was the first night of this season and I had never expected so many people, the lawn was just full! We watched Indiana Jones, not necessarily my favorite movie, but the whole scene made me love it. Everyone was chatting, eating and enjoying the night. It was very peaceful, even though we were with a lot of people.

And that should sum it up. As you can see we had a full schedule but there was also time for real holiday stuff like renting bikes in Central Park and ordering a way too big Pizza. We enjoyed every minute of it and if we could, we definitely would have stayed already. But for now, it’s back to work and back to preparing. Unfortunately I have not found a job yet, which I will share the details about in a separate blog. 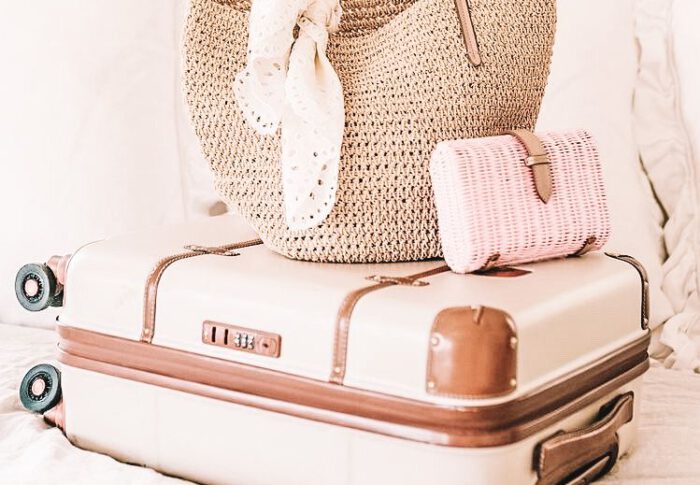 Yay, we booked our tickets to visit New York in June one more time before we are really going to move there. […] 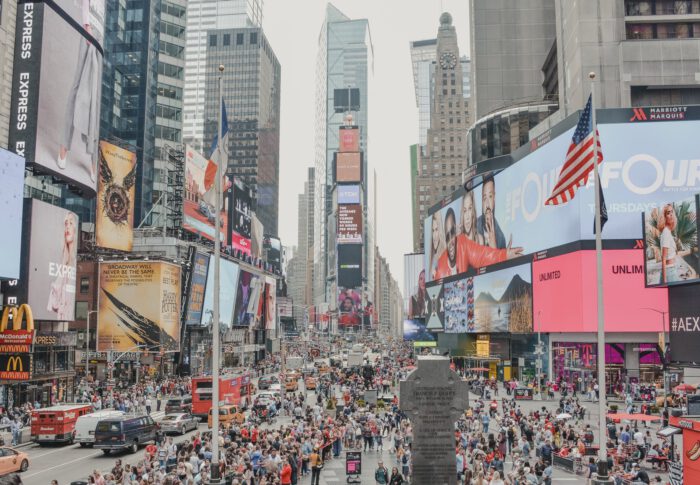 Of course when we knew, we wanted to tell our family and friends the news about us moving across the Atlantic Ocean. […] 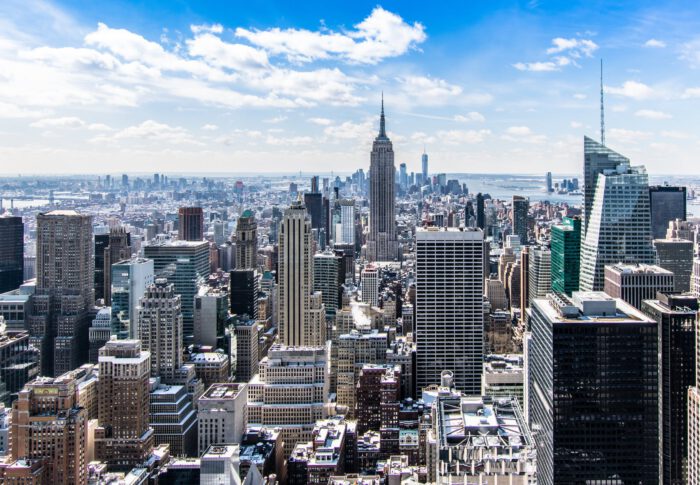 OMG My dream is coming true! I hope you can feel my excitement through my words because I am actually screaming all […]

Hi there! I'm Nikki, 24 years old and living in beautiful Amsterdam. I am preparing my move to New York City and writing about it here on my website. Enjoy reading!

NYC Update #1 Spreading the word and what’s next?

MY DREAM IS COMING TRUE

Quote of the day